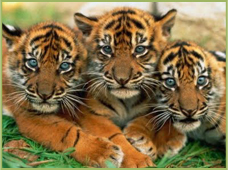 By rail : The nearest railway stations near Bandhavgarh are Jabalpur(164 km), Katni(102 km)on the Central Railway and Umaria (35 km) on the South Eastern Railway.

By air : The most convenient route to Bandhavgarh is by air to Khajuraho from where it is a five-hour drive ( 237 km ).

Set amongst the Vindhyas, in Madhya Pradesh, Bandhavgarh is a small national park, but with the highest known density of tiger population in India. This is also known as White Tiger territory. These have been found in the old state of Rewa for many years. The other species found in abundance in Bandhavgarh are the gaur or Indian bison, the sambar, the barking deer and the nilgai.

The terrain is made of rocky hills, sal forests and grazing areas, formerly agricultural land. The finest of these hills is the Bandhavgarh hill, and on its highest point stands Bandhavgarh Fort. Though no records remain to show when the fort was constructed, it is believed to be about 2000years old. Several dynasties have ruled the fort: for example, the Maghas from the 1st century A.D, the Vakatakas from the 3rd century; the Sengars from the 5th century, and the Kalachuris from the 10th century.The oldest signs of habitation, are the caves dug into the sandstone, near the fort. Several of these contain Brahmi inscriptions dating from the 1st century B.C. Prior to becoming a National Park, the forest range around the region had been maintained as a Shikargarh, or game preserve, of the Maharajahsof Rewa. It was only in 1968, that the area was declared as a National Park. Since then, stringent steps have been taken to retain it as an unspoilt natural habitat