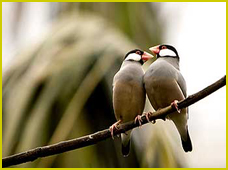 Location:   Bharatpur, Rajasthan.
Coverage area :  232 sq. Kms.
Main attractions:  Spoon Bills
Best time to visit :  The Keoladeo National Park is open throughout the year. August-October is the breeding season, so the birds are best left alone then. The best season for visiting this place is between October to February when the migratory birds come to visit this park from all over the globe.
Accommodation :
There are rest houses, lodges, dormitories and hotels. Rajasthan Tourism provides good accommodation at its hotel, 'Saras'. Inside the park, the Bharatpur Forest Lodge is maintained by the ITDC. Shanti Kuteer, Circuit House, Dak Bungalow are also good for a comfortable stay. Park Palace, Govind Niwas and the Tourist complex are the other choices. Almost all the houses around the park lend out one or two rooms to visitors. These are cheap and provide comfortable stay.

Arrival information :
By Rail : Bharatpur has its own railway stations with many major trains halting here.
By Air : The nearest airport is that of Agra.
By Road :
Nearby excursions :  Government Museum, Bharatpur which gives a glimpse of past splendour.
Just 32 kms from Bharatpur, is the Deeg Palace. This strong and massive fort was the summer resort of the rulers of Bharatpur and has many palaces and gardens.
Nearby cities :  Bharatpur

Keoladeo Ghana National Park, one of the most spectacular bird sanctuaries in India, nesting indigenous water- birds as well as migratory water birds and water side birds. It is also inhabited by sambar, chital, nilgai and boar. More than 300 species of birds are found in this small park of 29 sq. km. of which 11 sq. km. are marshes and the rest scrubland and grassland. Keoladeo, the name derives from an ancient Hindu temple, devoted to Lord Shiva, which stands at the centre of the park.

'Ghana' means dense, referring to the thick forest, which used to cover the area. While many of India's parks have been developed from the hunting preserves of princely India, Keoladeo Ghana is perhaps the only case where the habitat has been created by a maharaja. In earlier times, Bharatpur town used to be flooded regularly every monsoon. In 1760, an earthern dam (Ajan Dam) was constructed, to save the town, from this annual vagary of nature. The depression created by extraction of soil for the dam was cleared and this became the Keoladeo lake.

At the beginning of this century, this lake was developed, and was divided into several portions. A system of small dams, dykes, sluice gates, etc., was created to control water level in different sections. This became the hunting preserve of the Bharatpur royalty, and one of the best duck - shooting wetlands in the world. Hunting was prohibited by mid-60s. The area was declared a national park on 10 March 1982, and accepted as a World Heritage Site in December 1985.

Fauna :   Over 350 species of birds find a refuge in the 29 sq km of shallow lakes and woodland, which makes up the park. A third of them are migrants, many of whom spend their winters in Bharatpur, before returning to their breeding grounds, as far away as Siberia and Central Asia. Migratory birds at Keoladeo include, as large a bird as Dalmatian pelican, which is slightly less than two meters, and as small a bird as Siberian disky leaf warbler, which is the size of a finger. Other migrants include several species of cranes, pelicans, geese, ducks, eagles, hawks, shanks, stints, wagtails, warblers, wheatears, flycatchers, buntings, larks and pipits, etc. But of all the migrants, the most sought after is the Siberian Crane or the great white crane, which migrates to this site every year, covering a distance of more than half the globe. These birds, numbering only a few hundred, are on the verge of extinction.

It is birds from the western race of the species, that visit Keoladeo, migrating from the Ob river basin region, in the Aral mountains, in Siberia via Afghanistan and Pakistan. There are only two wintering places, left for this extremely rare species.One is in Feredunkenar in Iran, and the other is Keoladeo Ghana. The journey to Bharatpur takes them 6,400 kms from their breeding grounds, in Siberia. They arrive in December and stay till early March. Unlike Indian cranes, the Siberian crane is entirely vegetarian. It feeds on underground aquatic roots and tubers in loose flocks of five or six.