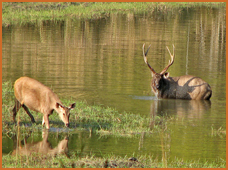 Main attraction :  One of the Most Scenic and Beautiful Wildlife Reserves in Asia

Best time to visit :
The park is closed from July 1 to October 31, because of the heavy monsoon. The ideal time to visit Kanha would be the period between February and June. A stay of at least 3 nights is recommended, in order, to get a really good sighting of Kanha's more elusive animals.

Accommodation :
The resort is situated on the border of Kanha National Park, home to India's majestic tigers and numerous mammals, reptiles and bird species. The luxury property is surrounded by the park's jungles and traditional tribal villages in the Mandla district of Madhya Pradesh, a central Indian state.

By Rail : The most convenient railheads for Kanha are Jabalpur and Nagpur.

By Air : There are regular air services to Raipur and Nagpur (270 km) from other airports in india. One can also take the flight to Jabalpur (170 km).

The Kanha National Park , in Madhya Pradesh, forms the core of the Kanha Tiger Reserve created in 1974, under Project Tiger. Stretching over 940sq km, the vegetation, chiefly made of sal and bamboo forests, grasslands and streams, this park is the sole habitat of the rare hardground barasingha. The forests of the Banjar valley and Halon valley, respectively forming Kanha's western and eastern halves, had even , at the turn of the century, been famous for their deer and tiger population. By a special statute in 1955, Kanha National Park came into being. Since then, a string of stringent conservation programmes have been launched, for the overall protection of the park's fauna and flora. It is one of the most well-maintained National Parks in Asia, and a major attraction for avid wildlife buffs all overthe world.

Kanha boasts of about 22 species of mammals. Some of the inhabitants of this park are the gaur, the largest of the world's cattle; the sambar,the largest Indian deer; and the chausingha, the only four-horned antelopein the world. Other frequent visitors include the Nilgai antelope, thesloth bear, the dhole, or Indian wild dog, and an occasional panther. Some 200 species of birds inhabit the park, that include the cattle egret, blackibis, hawk eagle, and the red-wattled lapwing. Shravantal is an old, earthen bound tank in the central Kanha meadows, which happens to be an important watering hole, for a large number of water fowl in winter. Bamni Dadar, known as Sunset Point, is the most beautiful section of the park, and the view ofthe sunset from this spot is absolutely mesmerising. Quite a few animals can be sighted around this area which include the sambar, gaur, the four-horned antelope and the barking deer.

The barasingha is undoubtedly, the jewel of Kanha, and drastic steps have been taken to rescue it from complete extinction. The enlargement of the grasslands, through village reallocation, has been responsible for this impressive achievement. Barasinghas exist almost totally on grass, and tall grass meadows are essential for their security. At the height of winter, between December and January, falls the rutting season of these animals, and huge groups can be easily spotted in the Kanha and Sonph meadows. A small, but significant number of blackbucks also inhabit the central Kanha meadow.

But for all the astonishing diversity in its wildlife population, Kanha is best known as the habitat of the tiger. Sighting and photographing this magnificent animal from elephant back, is an unforgettable experience.