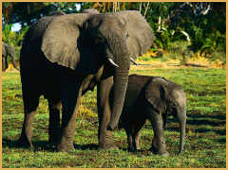 Accommodation :
While roaming around the most placid land of "God's Own Country" in Thekaddy, the Periyar Sanctuary is actually decked with tremendous natural bounties to be more fancied with the presence of the magnanimous elephant's counts in the arena. And to realize that natural beauty, a relaxing stay at its vehement hotels and resorts will do wonders to your stay. Along the impressive natural ambience, the luxury avails at this resorts and hotels will make up your mind for more stretchable journey in Periyar where some of the boat houses or houseboats are also marking great sophisticated look to make the boat safari more sovereign and impressive.

By Road : Kumily, the nearest town from Periyar is well served by both state and private buses from Kottayam, Ernakulam and Madurai in Tamil Nadu.

Between Trivandrum and Munnar is Thekkady, the home of one of India's oldest and best-known wildlife sancturies. The former princely state of Travancore began to develop the area as a sanctuary in 1934, using the artificial lake that had been formed by flooding in 1895 as its center. By 1950 the sanctuary had reached its present size of 780 square kilometers and was named the Periyar Wildlife Sanctuary.

The sanctuary is in fact closer to madurai in Tamil Nadu, 140 kilometers to the east via an extremely attractive road, and Cochin, 200 kilometers to the west. The vast calmness of the lake and the stark, skeletal remains of the trees that protrude from its waters give the area a primeval look. This impression is heightened by the mists that swirl ethereally over the water in the early morning.

Fauna :   The wildlife remains largely undisturbed by visitors who must observe it from special boats which glide across the surface of the lake. although the stars of the sanctuary are the families of wild elephants that often gather near the water's edge, other inhabitants include bears, sambhar, bison and spotted deer, as well as many screeching monkeys. The sanctuary was one of the first to come under the centeral goverment's successful Project Tiger. The birdlife is rich and varied and Periyar attracts dedicated bird- watching enthusiasts.