Nepal - a country of amazing extremes, is the home of the world's highest mountains, historic cities and the forested plains where the lordly tigers and the great one- horned rhinoceros trundle at ease. In fact enchantment is everywhere- for anyone in search of Shangril! 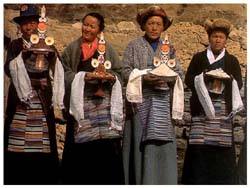 Nepal, a sovereign independent Kingdom, is bounded, on the North by the Tibetan Autonomous Region of the People's Republic of China, the east-south and west by India. The length of the Kingdom is 885 kilometres east-west and its breadth varies from 145-241 kilometers north-south. The country can be divided into three main geographical regions.

(a) HIMALAYAN REGION
The altitude of this region ranges between 4877m. - 8848m. It includes 8 of the highest 14 summits in the world which exceed altitude of 8000 meters including, Annapurna, Dhaulagiri and others.

(b) MOUNTAIN REGIONS
This region accounts for about 64 percent of total land area. It is formed by the Mahabharat range that soars up to 4877 meter and the lower churia range.

(c) TERAI REGION
The low-land Terai occupies about 17 percent of the total land area of the country. There is no seasonal constraint on travelling in and through Nepal. Even in December and January, when the winter is at its severest, there are compensating bright sun and brilliant views. 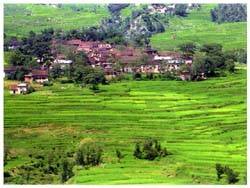 Nepal-a country with a long historic tradition is an amalgamation of a number of medieval principalities. Before the campaign of national integration launched by King Prithvi Narayan Shah the Kathmandu Valley was ruled by the Malla Kings, whose contributions to art and culture are indeed great and unique. In 1768 AD the Shah dynasty ascended the throne of the unified kingdom. His Majesty King Birendra Bir Bikram Shah Dev, is tenth King in the Shah dynasty.

The new democratic constitution of the kingdom was promulgated on November 9, 1990. Nepal is one of the founder members of South Asian Association for Regional Cooperation SAARC of which the third summit was held in Kathmandu in November 1987.

Nepal has a population of more than 18 million people made of different races living in different regions, with diverse culture, languages and dialects. The Gurungs and Magars live mainly in the west. The Rais, Limbus and Sunuwars inhabits the slopes and valleys of the Eastern mid hills. The Sherpas live in the Himalayan region. The Newars constitute an important ethnic group of the capital valley Kathmandu. There are Tharus, Yadavas, Satar, Rajvanshis and Dhimals in the Terai region. The Brahmans, Chhetris and Thakuris are spread generally over all parts of the Kingdom.

Hinduism and Buddhism constitute two major religions of Nepal. A remarkable feature of Nepal is the religious homogeneity what exists, particularly between the Hindu and Buddhist Communities. Apart from the Hindus and Buddhists, Muslim from the third largest religious group. The exquisite medieval Art & Architecture of the Kathmandu Valley vividly reflect the artistic ingenuity and the religious tradition of the people.

Nepali, serves the purpose of the kingdom's lingua franca in Nepal. The educated people speak and understand English as well.

Clothing depends on place and time, however, it is recommended to have both light and warm clothing. In the mountain areas warm clothes are generally a must.

AVERA6E TEMPERATURE AND RAINFALL IN KATHMANDU